Award-winning filmmaker, Kemi Adetiba has hinted at starring BBNaija housemate Whitemoney, in a new season of King of Boys.

Whitemoney, who has a lot of talents ranging from cooking to hairstyling to singing and even acting, has in no doubt won the hearts of many viewers of the show.

On Thursday, September 3rd, Kemi Adetiba took to her verified Twitter page to ask Nigerians if Whitemoney should be featured in the next season of her movie, King of Boys.

READ ALSO:  Yousef said Peace picked him as her deputy HoH because She knows he won't take her feelings for granted (Watch Video)

“Whitemoney in KOB season 2?”, she tweeted.

As of the time of writing, Adetiba’s tweet has garnered over a thousand comments with majority of fans rooting for Whitemoney and with over 18,000 likes. 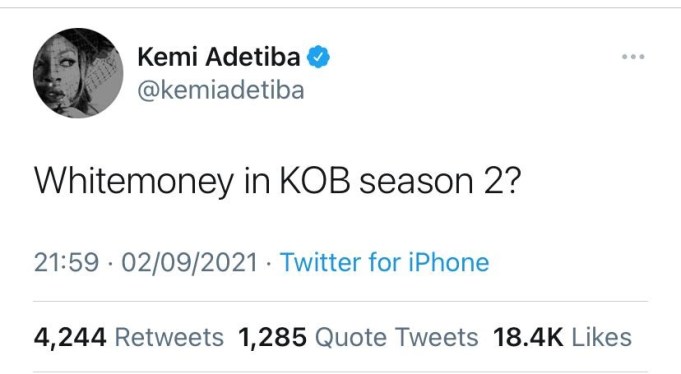 The tweet however received positive reactions from fans who noted that Whitemoney would be a good addition to the cast of the blockbuster movie series.

@everdami wrote: “Yes, Let him avenge Odogwu Malay. He will be the descendant of Odogwu who came to town when he heard the death of his brother. It’s going to be mad.”

@baybie8, wrote: “Yes! I will personally make my entire village watch this season 2. Whitemoney is good vibes and we love him too much. Make it happen sis, i can’t wait to watch. Thank you!”

Special Welcome for WhiteMoney, Liquorose and Emmanuel as they arrives Akwa Ibom (Video)

Moment Boma Said He Makes the ladies W*T when he was...

Am done with the marriage – Actress ChaCha Eke announces the...

#BBNaija Reunion: Which of these dramas are you excited about and...

Did You Missed What Happened Between Cross and Angel at last...

Peace Becomes the first Head of House in BBNaija Season 6...

I am unapologetic of what I said about Pere because I...

I am really attracted to Cross, My feelings are true –...

#BBNaija: WhiteMoney’s winning the show was well deserved, he is a...

Mazi is in Love Oh! Can you guess the babe Whitemoney...

See Maria’s Facial expression when Niyi told her that He is...