A Twitter user who was guessed to be an Aviator has offered the sum of five million nairas to the boyfriend of BBNaija Housemate, Saga, for him just to quit the relationship with her.

This was seen not quite long after Nini finished the secret task given to her by Biggie to prank Saga by leaving the house for good 24 hours, in which she succeeded.

READ ALSO:  #BBNaija: “Are we friends with benefits or not” – WhiteMoney asks as he kisses Queen (Video)

In reaction to the emotional suffering, the aviator identified as @oku_yungx on Twitter took to his page to support Nini’s boyfriend with N5M to quit the relationship for Saga ahead of the show’s conclusion.

“If you are NINI’s boyfriend, please let Saga have her. I will send 5 million to your account. I don’t want him going through a mental breakdown after the show,” he wrote. 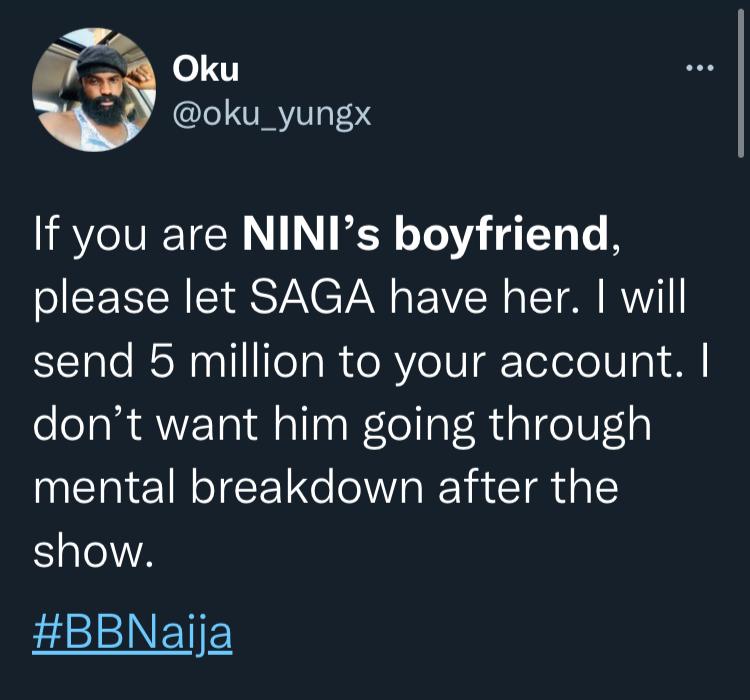 “Liquorose and I are cool, no bad energy over here” — Angel reveals

#BBNaija: “You and Liquorose should create highlights of your relationship, let...

I came into the BBNaija house to find love — Yousef...

Pere joined Maria in bed to have a nap with her....

Davido motivated me to return back to Nigeria, he told me...

After Party! If You Sleep, You do Yourself. EmmaRose doing it,...

DIARY SESSION: I would have Picked Saga to replace me for...

Pastor who refused to wed couple days ago after they came...

#BBNaija: “I didn’t come here for love, but from the first...

Female housemates rocking their “My Full Chest” lingerie for the party...